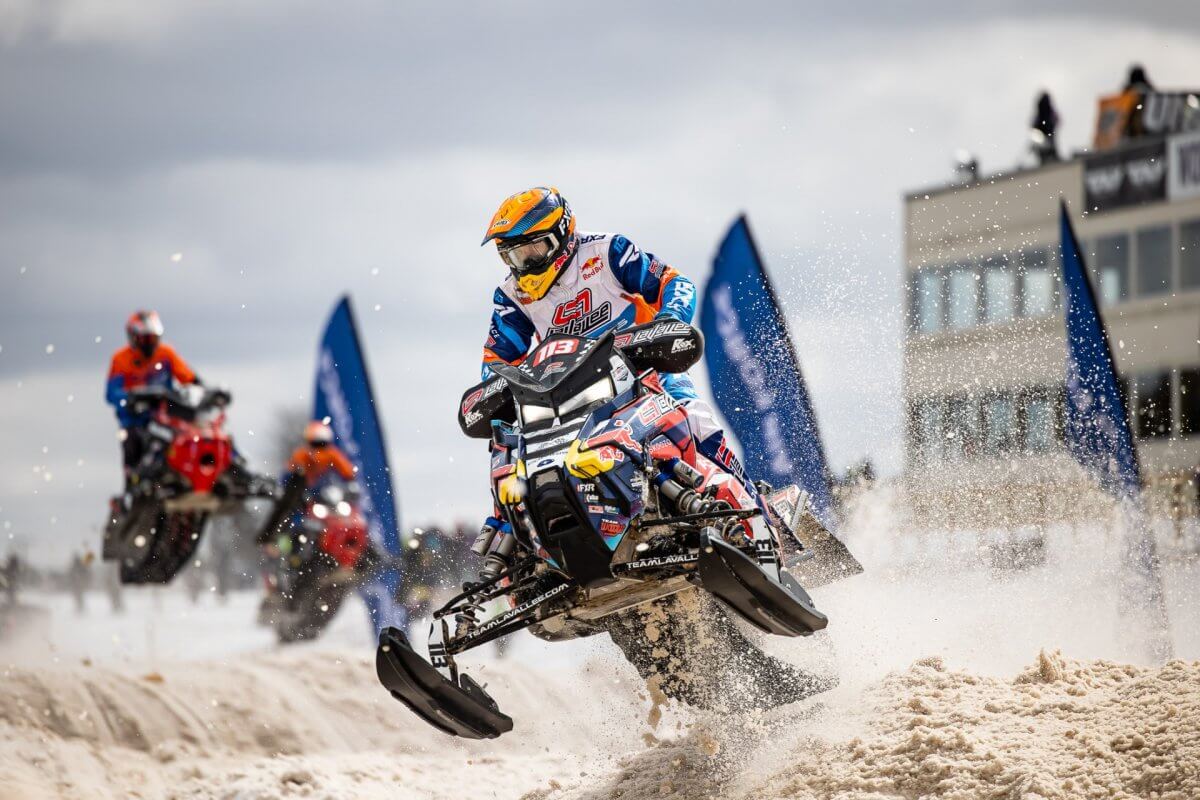 Eagle River, Wis. ~ The 2021 AMSOIL Championship Snocross, POWERED by RAM Trucks season came to completion on Saturday night. That left a day of reward for the national series contenders as well as an opportunity for one big payday for the best in the business.

After two full days of racing at the World Championship Derby Complex in Eagle River, Wis., the series shifted gears on Sunday. The AMSOIL Dominator was the only pro racing available on the final day of the year as the annual Showdown revved the limiters as the sports amateur classes had one last go at it in 2021, with bragging rights on the line.

The AMSOIL Dominator historically starts the snocross season with its head-to-head, winner take all attitude. But a lot of things changed over the course of the 2021 season, and the annual bragging rights race, (and a $10,000 check), was shifted to the end of the year in Eagle River.

That wasn’t the only change to the fan friendly affair. Instead of a head-to-head format, this year’s version offered up rounds of qualifying in both Pro and Pro Lite. With end of the year injuries and mechanical issues, 13 riders went through qualifying for seeding in the main event. The real kicker was the Pro class had to line-up about six sled lengths behind their Pro Lite counterparts.

When the ten-minute (plus two laps) race went green, Pro Lite riders Adam Peterson and Evan Daudt found the lead heading into turn one. But before the first lap was complete, newly crowned Pro champion Elias Ishoel split the two like thread through a needle.

Ishoel is a two-time winner of the AMSOIL Dominator, as well as 11 finals wins this past season. Giving the three-time champion an early lead is a recipe for disaster for the field. But with 10 Large on the line, racers should expect the unexpected.

Peterson kept close to Ishoel, and as the pair started getting into lappers, Ishoel miss-timed his rhythm. With 5:30 still on the clock, he uncharacteristically nosed it in, crashing out of the race. That gave the other pro level champion, Pro Lite title holder Peterson, the lead.

Since no Pro Lite rider has one the AMSOIL Dominator in its ten year history, Peterson had the deck stacked against him. He was pressured heavily by fellow Polaris rider Emil Harr as the clock ticked to zero. But Harr was unable to close the gap and Peterson’s confidence and speed grew as the final two laps ticked away.

Peterson, who started the year with a win, capped it off with a win. Going toe-to-toe with Elias Ishoel and coming out on top was gratifying, but Peterson also knew he was ready for the longer race and the talented field around him. In the end, his effort and training left him holding the $10,000 check.

“I was right behind Elias and I just tried to stay with his pace and then he went down,” said Peterson. “I was like, ‘Alright, just gotta be smart and remember to breathe, then try to hit my marks.’ I’m used to practicing ten minute motos, with me and (teammate) Kyle (Pallin). That’s a huge help for this. I was still super tired by the end of that (race).”

Harr put in a valiant run, coming from mid-pack and working his way up to finish second. His Judnick Motorsports teammate and Pro Lite rider Nick Lorenz also kept pushing through the carnage to finish third.

Every season, during the final round of racing (historically at Lake Geneva, Wis.), ISOC offers up a day dedicated to amateur racing. No points, just bragging rights as the tour shifts into its summer hiatus.

On Sunday, the annual Snocross Showdown gave way to a great day of racing. Some riders moved up classes, some champions kept their crown and some first time winners came out of the pack.

CHAMP 120: The Champ 120 class kicked off Sunday at the Derby Track. All season long, Owen Eide has been knocking on the door to the top step of the podium. On Sunday, Eide closed the deal. He held off Tavin Knudson by 4/10ths of a second. Season points champion Avery Hemmer finished third.

SPORT LITE: Craydon Dillon was exceptional on his way to winning the Sport Lite final on Sunday. The Ski-Doo rider came into the final trying to find a good start, and succeeded on his way to victory lane.

“I was kind of late on the light in the first moto, so I didn’t know how the clutches were working,” said Dillon. “But I just pulled the hole shot, table-top, double, triple and I was gone.”

JUNIOR 10-13/TRANSITION 9-13: Isaac Peterson had a spectacular day of racing, becoming a double win on Showdown Sunday. The East Bethel, Minn. native pushed his Polaris to wins in Junior 10-13 and Transition 9-13.

“I kind of knew the track a little bit because I just raced it, and I tried to find smooth fast lines,” said Peterson after his Transition 9-13 win. “My dad got my sled perfect and just hold on during the hole shot and don’t let off.”

Trenton Hilmerson and Kenny Goike rounded out the Junior 10-13 podium. Goike moved up and finished second in Junior 10-13, ahead of Hunter Laase.

JUNIOR GIRLS 9-13:  Kendall Rose pushed her Zandstra Motorsports sled to the Junior 9-13 win. The Dorchester, Wis. rider knew where her speed was on the track, giving her the advantage over the field.

“Definitely around this back half,” said Rose. “The whole corner actually.”

Victoria Dillon finished second with Ava McCurdy coming across the line in third.

FXR SPORT: Ski-Doo’s Brian Peterson put in an impressive run, holding off a bevy of riders on his way to Sunday’s Showdown win in the talented FXR Sport final.  The Fox Lake, Ill. Racer was on point from start to finish, tackling an ever changing track on his way to victory.

“Honestly, it’s like everyone’s been saying, being constant, hitting your marks,” said Peterson. “The track changed a lot from practice and it was really churned up for the final. Just hang on, run the smooth lines and be consistent from lap to lap.”

STOCK 200: Lincoln Skar, Gvanni D’Antonio and Kooper Groen all won a heat race on Sunday, and all three found the Stock 200 podium as well. But it was D’Antonio who held the point in the Stock 200 final, besting Skar and Groen.

JUNIOR 14-17: The Junior 14-17 was actually a mixed bag, featuring the combined classes of Junior 14-15 and Junior 16-17. When checkered flags were sorted out, Ski-Doo’s Tanner Zierden was victorious in the Junior 16-17 class, followed by Brandon Hyte.

TRANSITION 8-10: Jimmy Stanisich was on a mission in the final Showdown race of the day. The Eveleth, Minn. resident held off fellow Ski-Doo rider Lincoln Meyer in the final to grab the top spot of the podium. Zach Miller (Arctic Cat) made the podium complete by finishing third.