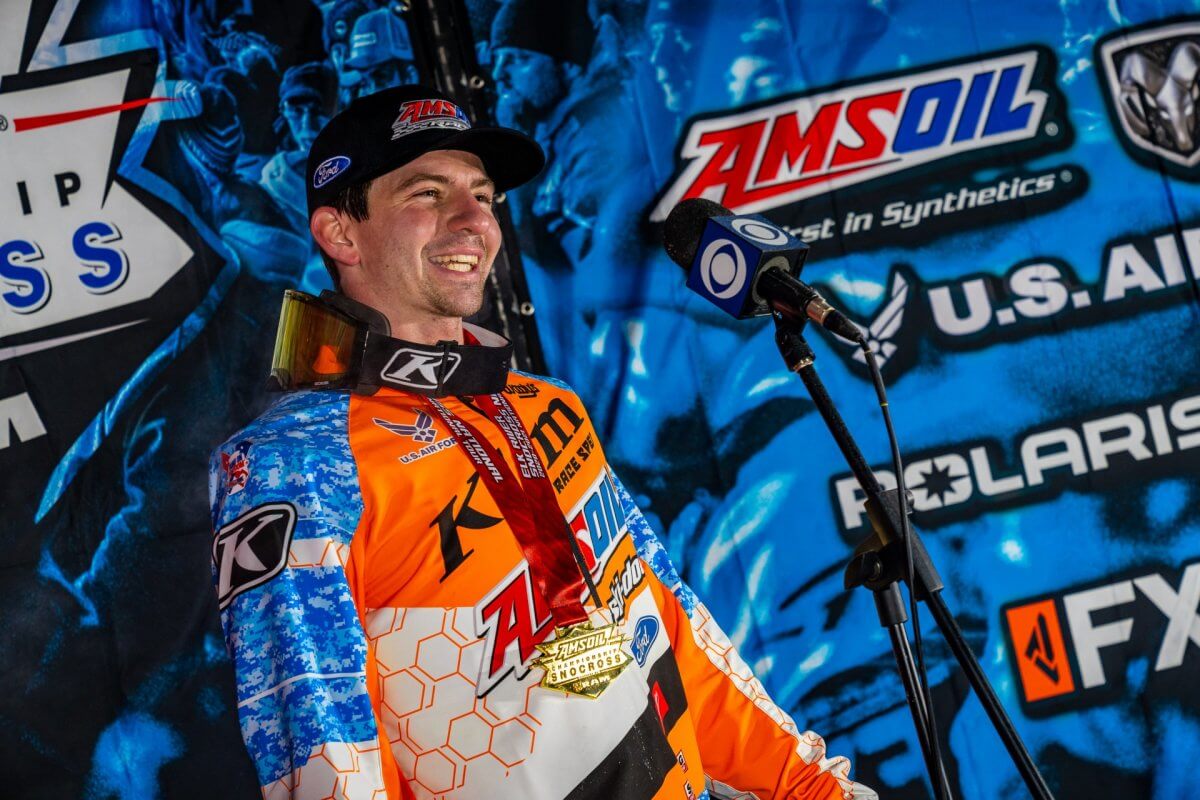 Lincoln Lemieux is a perennial frontrunner in the Pro class from St Johnsbury, Vermont, who most recently tasted victory at last season’s opener at ERX Motor Park. Ahead of the 2022 season, we caught up with Lincoln to chat about his offseason, leaving Scheuring Speed Sports and starting his own team, and more!

Snocross: First off, how was your off-season? What did you do to stay busy?

Lincoln: This off-season my wife and I had a baby! Luckily I got the baby room/nursery ready before I left last season. After she was born May 23rd I really just spent time with my wife and daughter and tried to help out as much as possible. I also take care of 9 cabins on the lake we live at during spring-fall. We got out on our pontoons and jet-skis as much as possible as well.

We had 3 weddings to attend as well. 2 of them I was lucky enough to be in and one was Hunter’s. They were a lot of fun! All of that kept me busy and now I’m focusing on training and getting ready for this upcoming season.

SnoX: Sounds like a very fun and eventful offseason, and congratulations on the new addition to your family! You mentioned training for the new season, something unique about Snocross is that riders can’t practice throughout the offseason because there’s no snow to run on. Explain the challenge of having to go months without being on the sled then being thrust into the season.

Lincoln: The biggest challenge with not riding all year round is getting the sled, tuning, and testing them before the first race. With ISOC adopting the schedule that we had from last season definitely helps. We are able to practice longer and find weak points in the sleds. We also have more time to test suspension and clutching.  So overall I would say with the new schedule everyone has a good amount of riding under there belt whereas in the past only a handful of riders had enough practice time.

SnoX: After last season’s schedule had to be altered so much, we missed out on going to some great traditional venues. Which event that was cancelled last year are you most excited to return to this season?

Lincoln: That’s a tough choice. There are so many good venues that are returning. Canterbury Park, New York, and Lake Geneva are some of my favorite races. I would say I’m most looking forward to Canterbury Park. It’s the first race of the season with One Three Motorsports and it’s a perfect venue with indoor seating. I have had really good success there in the past with multiple wins and I’m really looking forward to it.

SnoX: Alright now the elephant in the room. Fans won’t see your on your familiar Scheuring Speed Sports sled this season, as you’ve started your own team. What went into that decision and why was now the time to do it?

Lincoln: This is a loaded question. I didn’t have to decide anything with my future at SSS. They simply didn’t want me back. I saw it coming at the end of last season at Eagle River after I got hurt. I could have took the line and finished in the top 5 in points. I was told not to, so I didn’t. At that point I knew my future wasn’t looking good with SSS, which was disappointing because I really respect professional athletes that spend there whole careers on one team, and I was hoping to do that. About a month later I was informed that I wouldn’t be returning and to “focus on being a dad”. So that’s what I did. Skidoo tried to find a spot for me on one of the other factory teams but with Boss Racing shutting down there wasn’t enough rides available. Jake DaSilva asked me one day what my plan was and I said I didn’t have a factory ride. He said “well let’s start our own team”. I laughed it off and said if you can find the sponsors I would be all in. Within a week Jake made a few phone calls and told my dad and longtime family friend Scott Calderwood and we decided that we were going to acquire Boss Racing and form our own team. I am really grateful that I have so many people of my side that believe in me and that know I can win.

SnoX: Is it a confidence boost knowing you have top-level equipment, having acquired the assets of Boss Racing, which won the last three Pro Championships?

Lincoln: It definitely helps that we acquired Boss Racing and that we’re sponsored by Skidoo. The parts inventory that we acquired from Boss Racing gave us a great starting point and what they left behind gave us a good idea of what their setups were for Elias Ishoel. At the end of the day, the crew that set up Boss Racing’s sleds won’t be setting up mine so our team has to come up with that top level equipment and winning set up. The knowledge that we gained from buying Boss, and the knowledge that I can bring from SSS, should give us a very fast sled and I’m fully confident in my mechanics Ryan Duncan, Ronny Rathburn, Jake Dasilva and my dad, Joe Lemieux.

SnoX: Do you see yourself expanding the team to feature more riders in addition to yourself in future seasons?

Lincoln: Unfortunately because we got our deals out together late with Skidoo we weren’t able to have another racer on the team, but in the future we would love to expand and have another rider. I have always loved working with riders and seeing/helping them succeed.

SnoX: Lastly what are your goals and expectations for yourself and your new team for the 2022 season?

Lincoln: Our goals for this season are to win. I have always started the season off strong. I want to improve every race and be contending for the championship at the end of the season.