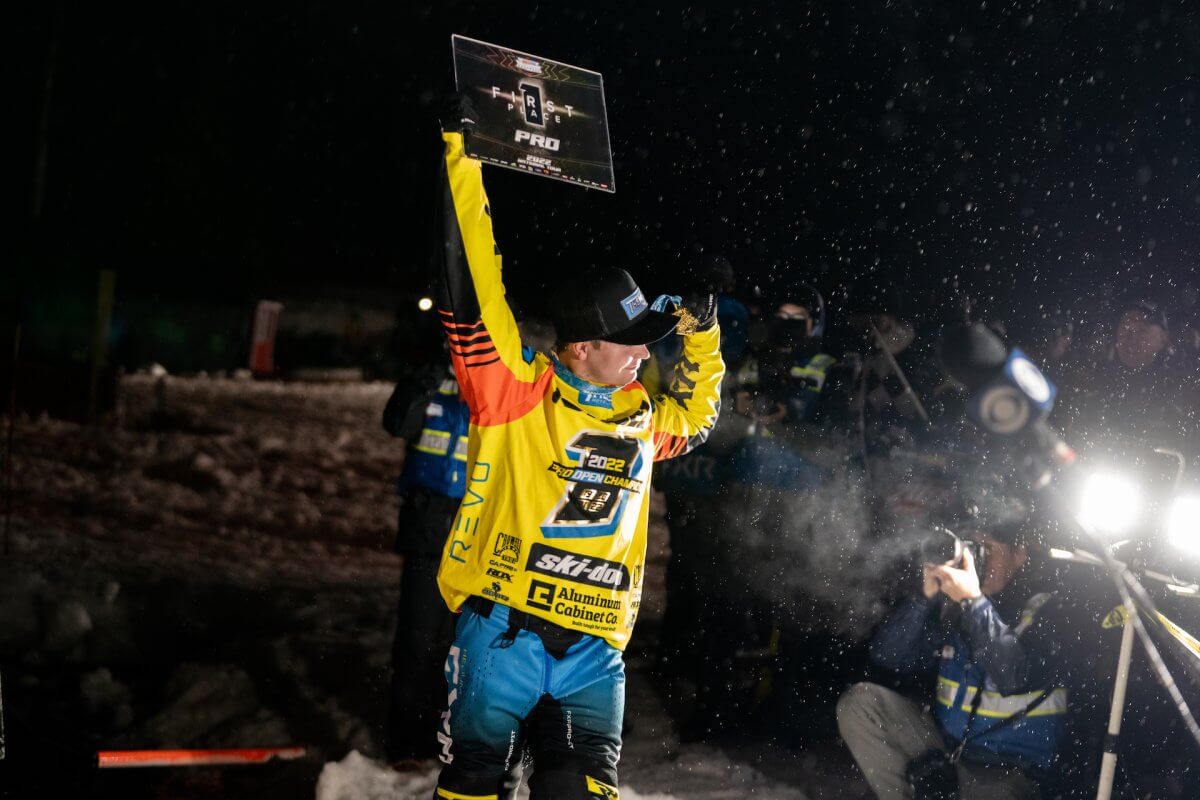 But with the teams lining up for their morning practice sessions, COVID kicked in and the event was canceled as the world began dealing with the pandemic. Two years later, Cannonsburg is back and this time it is for all the marbles.

The series moved its championship weekend to the popular ski hill just outside of Grand Rapids. Only one class (Sport) had decided its title holder the previous weekend in Lake Geneva. That left all of the pro classes up for grabs on the final weekend, and Friday night brought out the fight in all of the championship contenders.

Several riders have closed the gap on Elias Ishoel’s points lead this season. Hunter Patenaude even led in the middle of the year, and top Pro’s like Emil Harr, Francis Pelletier and Kody Kamm have put forth respectable challenges towards the three-time defending champion.

Ishoel held a 53-point margin over Harr heading into the two Michigan rounds. That’s a healthy lead, but not one a challenger couldn’t overcome with a near perfect weekend and a little bit of bad luck for Ishoel.

Ishoel, however, has transformed himself over the past four seasons. From a straight pin-it-to win champion to a strategic pro who is still capable of top end speed, but one with a maturity that comes with thousands of laps at the sports highest level.

He was all of those things on Friday night as the Norwegian brought home win number nine and title number four.

Oskar Norum was on a mission to put his near-misses from Lake Geneva behind him in Michigan (Norum had a pair of fourth place finishes). He qualified well (win and a second) and took advantage by getting out in front after the first turn. The Polaris rider rode well, trusted his lines and kept Ishoel in check for the first four laps. But Ishoel came through the first few turns in second and started attacking a course that was well beyond rough after a full day of racing. Ishoel was confident in his own lines and started turning faster lap times. Once he got past Norum and into some clean air, he rode his own race. Ishoel was all energy as he crossed the line with his third straight win, and that fourth straight title.

“When I got that good start, I had in my mind set to win,” said Ishoel. “Every championship I’ve won, I have clinched it with a win that day. When I was behind Oskar, I was just going for it, and we made it. I’m so happy I can’t thank my whole team enough for this first year together. There’s so many people behind me that support me, and I can’t thank my family, my friends, and all the fans enough.”

Norum never stopped charging after dropping to second. He had little choice as a group of five riders were looking to move up the ladder. Hunter Patenaude and Adam Peterson closed the gap on Norum thanks to a head-to-head challenge that pushed both riders to try tricky lines and carry extra speed towards Norum. In the end Norum was able to sneak away, picking up his third podium of the year.

In the battle for the final podium spot, Peterson was playing blanket coverage on Patenaude. Peterson pulled alongside Patenaude on several occasions, but Patenaude is a tough driver to pass, and Peterson dropped off of Patenaude’s pace over the final two laps. Patenaude finished third, his eight podium finish of the season.

Peterson, who was named the series Rookie of the Year, grabbed the hole shot off the start. He had a bobble on the last lap that put Logan Christian into fourth on the last lap. Peterson would right his sled and finished fifth.

There are 90 points available during a weekend of AMSOIL Championship Snocross racing. Coming into the weekend, Pro Lite rookie Jordan Lebel was pacing the field with a 74-point lead. He is closing in on his first pro level title, but he’s going to have to wait one more night to clinch, in part because of his own race on Friday, and the exceptional race put in by Marcus Ogemar.

Ogemar grabbed the hole shot and vaulted down the hill with Evan Christian in tow. But Lebel and Nick Lorenz were in the mix as well, coming out of the first few turns in third and fourth and looking to move up.

Lebel was able to get into the runner-up spot on the second lap, with Lorenz and Christian right there with him. Lebel was charging, but one lap later, he missed his timing on a jump, swapped out and hit the ground, knocking him down to his final finishing position of fourteenth.

Lorenz did more than capitalize. He moved into second and was the fastest man on the track. He turned up the pressure on Ogemar on every lap, and as the clock hit zero, Lorenz crossed the finish line with the lead. But there were still two laps remaining, and Ogemar regained his lead a few turns later and controlled the pace for the remainder of the final. His win was his second in 2022 and kept him in front of Lorenz for second overall and within reach of Lebel for the points lead.

“The hole shots were truly important to stay out front tonight,” said Lebel. “I had a pretty decent lead for a while in the beginning but then I heard Nick was coming and it was a good battle. I had to fight for that one and I really wanted to win so bad. I was able to find some good lines in the end, and yeah, it’s really good to get the win.”

Lorenz was both controlled and aggressive as he tried to get around Ogemar. He set the fastest lap time in the final but couldn’t get any of his pass attempts for the lead to stick. In the end, it was his first podium since round eight, and it kept him in reach of Ogemar in the points race.

Christian followed up a good day of qualifying with a solid run in the final that saw him gather his second podium of the season and possibly solidify a top five overall finish this season. Anson Scheele came from the back row to finish fourth, one spot ahead of Evan Daudt.

PRO WOMEN: If Malene Cottew wraps up her second straight Pro Women’s championship this weekend, it might just be the icing on the cake for the current points leader.

This past week, Cottew was voted as the AMSOIL Championship Snocross “Fan Favorite”, which for the first time spans across all of the Pro classes within the series. It marks a major accomplishment for the veteran rider, and the Pro Women’s class.

The icing was included for Cottew on Friday night. She entered the day with a 33 point lead over Inanna Hauger. She took the lead after the first turn in the final and led from start-to-finish. With Hauger finishing third, that was more than enough for Cottew to wrap up the title.

Hauger had to work herself into podium position on the first lap, one spot behind Taven Woodie, who kept Cottew in check on her way to her fifth straight podium.

PRO SNOWBIKE: The Manitoba Missile, the Cowboy and the Butcher. While it might sound like a Netflix special, it is in fact the top three riders in Pro Snowbike. With a two moto format, points are at a premium with each race, and Friday night proved that each lap counts as the season winds down.

In the second moto, Horbaty would need a strong race to keep pace and push off Kirchmeyer’s championship celebration for one more night. Horbaty took care of his end of the deal, grabbing the hole shot and keeping Kirchmeyer in his roost for the first few laps. Horbaty would stay out front, grabbing the win and the overall.

Kirchmeyer would run second until the final downhill when he would scrub out, opening the door for Boucher to finish second in the moto and give Horbaty two extra points. Kirchmeyer would go 1-3 for second overall and Boucher’s 3-2 would put him in third.

FXR SPORT: Adam Ashline wrapped up the FXR Sport title in Lake Geneva last weekend, but that didn’t damper his competitiveness coming into the final two rounds in Michigan.

Ashline snuck through the right-handed turn at the start and jumped into the lead. As has been the norm this season, once the points leader gets out front, he doesn’t give it up. Ashline picked up his tenth win in a season that has him only missing one podium.

Crayden Dillon finished the season on a roll as he worked his way up the standings with a nice second-half surge. Dillon’s runner-up finish on Friday night was his fourth straight podium finish, helping inch closer to the second overall spot.

That spot is currently being held down by Eric Downs, his first trip to the podium since his round 11 win at ERX.

SPORT LITE: Cameron Cole went wire-to-wire to clinch the Sport Lite championship on Friday. Cole grabbed the hole shot off the steep up-hill start, coming out of the right-hander with the lead. He never looked back, riding to his sixth win of the season.

Brandon Nelson came out of the first turn behind Cole in second. He would keep pace with the race leader for his second podium in 2022. Tanner Johnson rounded out the podium in third, his fifth straight Sport Lite podium since moving into the class five rounds ago at ERX.

TRANSITION 8-10: Riley, Ryland and Ryder. The Triple R’s put on a see-saw battle all season long for Transition 8-19 supremacy. The three ended the year just 19 points apart, with Avery Hemmer a close fourth and Tyson Kielman right behind her in fifth.

In round 15, class champion Riley Johnson wrapped up the title by picking up his fifth win in 2022 by leading the final from start-to-finish. Ryder Hayes won both of his heat races and placed second in the final after starting 13th, but he couldn’t overtake Rylan Nelson for second overall as Nelson finished second in the final.

STOCK 200: The trio of Trenton Peterson, Ryan Shimanski, and Gvanni D’Antonio were the Stock 200 frontrunners all season long, and it was those three that filled up the podium in the final Friday night class race of the season.

D’Antonio finished the season with two podiums but was able to grab his first win of the year after getting the hole shot and leading from start-to-finish. The win pushed him to third overall.

Shimanski was looking for his fifth win of the year but settled into the runner-up spot behind D’Antonio on the first lap. His second place finish was enough to keep out in front of the field for the overall Stock 200 championship.

Peterson rounded out the podium in third, and in doing so, finished 2022 second overall.

JR 14-15: Kenny Goike finished off a strong second half of the season in Junior 14-15 with a pair of heat wins and the victory in the class final. It was his second Friday night win in the past three events. It wasn’t enough to catch Isaac Peterson for the overall points lead, but he did finish second on the season.

Noah Daniels led the race for the first half before finishing second behind Goike. Jack Beasley finished third.

TRANSITION 9-13: Brady Freeland’s second half surge to catch Tanner Johnson in the Transition 9-13 (Friday) points race came up short on Friday night. Freeland did pick up the win, thanks to a last lap pass on race leader Dylan Lebel for the lead.

It was Freeland’s fourth podium in the past five races, but Tanner Johnson secured the championship thanks to his third place finish behind Lebel.